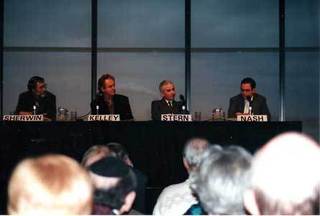 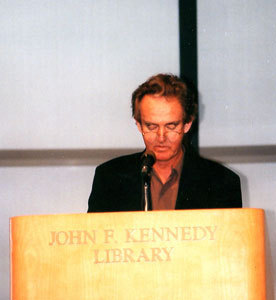 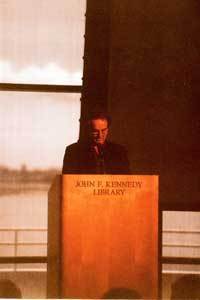 The First Book of Timothy

"As I read, I often thought of Fielding and Sterne. Even Swift comes to mind, with his exaggerations and occasionally bitter turns. But comparisons of this kind are much too reductive: Kelley's book is sui generis. . . . rather devastating in the way that serious satire ought to be. Kelley has mounted a severe critique of the Cold War climate in the U.S., subtly mixing politics and literature in a manner that illumines both . . . . he has been willing to take those imaginative risks that make for originality."

--Jay Parini, novelist, poet, literary critic, and biographer of Faulkner, Steinbeck and Frost. [n.b. the film on the last days of Tolstoy, "The Last Station," was based on Parini's novel of the same name; his novel about Herman Melville, The Passages of H.M., was published in 2010.]

"The First Book of Timothy strikes me as an astonishingly varied and rich canvas, on which vivid, interesting, eccentric characters go through the games and fates of relationships . . . . The writing shows the meticulous concern given each phrasing and rhythm, capturing and fixing the reader's attention as only an authentic writer does."

--Helen Wolff, recognized as "the grande dame of letters" by The New York Times, co-founder of Pantheon Books, international publisher of translated literature by Gunter Grass, Umberto Eco, Georges Simenon and Boris Pasternak, among others.

"The narrative craft everywhere on display in the novel bears witness to Kelley's mastery of the techniques of literary modernism, the picaresque, and the comic respectively. While Kelley's narrative subject recalls E. L. Doctorow's The Book of Daniel, the grand scale of its cultural mythology parallels Robert Coover's in A Public Burning, and Kelley's instinct for the dark humor in everyday incidents matches that of Vonnegut and deLillo. . . . In addition to its literary value, The First Book of Timothy promises to play a central role in re-describing the cultural history of the Cold War."

"The First Book of Timothy, which deals with the moral, political, and intellectual dilemmas of our forty-five year nightmare, the Cold War, will be the first in a steadily growing literature. It will be instantly significant to academics for both its literary quality and its value in courses on the history and mythology of the Cold War. . . . [H]ighly original, various readers will be reminded, as I was, of the writing of such as Kurt Vonnegut,r., J.P. Donleavy, John Barth, Robert Musil, and Gunther Grass. Beckett, too, perhaps. In my experience, the greatest joy in publishing is discovering and launching a book like this."


"I have read Robert Kelley's The First Book of Timothy with great interest and pleasure. Kelley's eerily accurate sense of character, his expertly crafted plot, and the symbolic richness of his spatial framing [along with] the formal sophistication of this work, which often places the reader at the frontier between reality and dream or nightmare—a situation particularly appropriate to the historical background of the novel, namely, the Cold War—lends it great appeal to those interested in imaginative fiction."


"The First Book of Timothy is a most unusual and distinguished book, both with respect to its content, I mean the audaciously organized examination of the weird years of the Cold War as they extend around the intriguingly bemused Timothy, and its wonderfully various and inventive writing. It is an original in a sea of ordinariness . . . . I take one of the main problems a writer faces is to devise the resources needed to convey his or her meaning, to create a style which is both new and yet at the same time experienced as the perfectly natural extension of what the language can sustain. The First Book of Timothy seems to me to do exactly that."

"The First Book of Timothy is a stunning political allegory set during the bleak, anxious days of the Cuban missile crisis. In the mode of Pynchon and Coover, Robert Eaton Kelley invokes the hallucinatory atmosphere of America at the height of the Cold War in this tumultuous story . . . . A mushroom cloud hangs over Kelley's novel, and The First Book of Timothy convinces us that it has not been dispelled by the fall of the Wall, for, in Kelley's dark, comic imagination, nuclear holocaust is the end—the fulfillment—of the dual pursuit of individuality and manifest destiny in America."