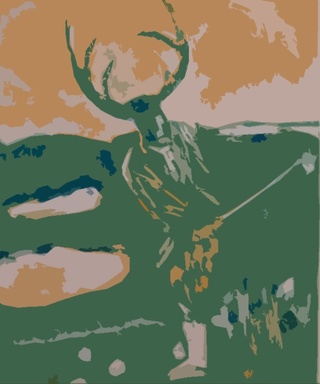 the Soul of Shaman

Shaman of the Green
Overview

Shaman of the Green’s treatment carries on golf’s rich tradition of literature that explores the game’s spiritual components and connection to life itself.

Author Robert Eaton Kelley, who makes his home in the spiritual mountains of the Great Smokies and Blue Ridge in western North Carolina, has written Shaman of the Green, a literary potpourri of short stories, epiphanies, whimsies and musings on the mystery and comedy, the spirituality and mythology, and withal the fantasy and history of golf.

Shaman of the Green is nominally about golf, metaphorically about life. The book romanticizes, mythologizes, and celebrates golf; explores and satirizes it. It exults in golf, laughs at it and cries with it. The book does all of these things and more, because golf is at one and the same time about all life itself, about glory and exploration, spirit and failings, myth and comedy, romance and history.

Shaman of the Green is as well a marvel of literary entertainments and epiphanies of satire, farce, spirit, lyricism, romance, and the simply fantastical. The book is about the human elements of life, focusing on characters, incidents, and tales. The variety and lengths of stories and glimpses will intrigue; the writing sparkles. As Sol Stein wrote, "The best of good writing will entice us into subjects and knowledge we would have declared were of no interest to us until we were seduced by the language they were dressed in.”

The promise and potential for a wide and diverse readership is great. Beyond appealing to golf’s core market of 26 million players, perhaps Shaman of the Green is as well a Siddhartha of golf, as in Herman Hesse. Or think Izaak Walton on fishing or is it Robert Pirsig’s Zen and the Art of Motorcycle Maintenance? Hints abound of:
• Michael Murphy’s Golf in the Kingdom
• Stephen Pressfield’s The Legend of Bagger Vance, novel and film
• John Updike’s literary golf dreams
• P.G Wodehouse’s golf farces
• the spiritual probings of Scott Peck, and Deepak Chopra
• and the lyrical wanderings of Lorne Rubinstein and Michael Bamberger..

This thoroughly entertaining, quasi-metaphysical ride begins gently with “Soul Shaman – The spirits played the game a million years ago, don’t you remember?” and soars from there. The stops along the way include:
• Pilgrimage to the Holy Land
• Colonel Bogey
• Intimations of Immortality
• Fiona (Love on the Links)
• The Secret(s) of Golf
• 32 Degrees
• The Golf Gods
• Player Yordy

NOTE: The author has read all of the book’s individual pieces to several groups of non-golfers all over the world and received enthusiastic responses, which portends an audience for Shaman of the Green beyond the vast golfing population.

Selection from "Intimations of Immortality"

He arrived at the first tee as an afterthought in our minds, straight from the road as a traveling salesman or in whatever guise it was that he traveled those days. His white dress shirt was halfway unbuttoned as if he had been slit open from neck to breastbone, his shirttails loose and blowing in the wind like a white flag of surrender in the aftermath. His sleeveless white undershirt partially bared his naked shoulders to the heavens, not to mention our assembled threesome. It was a wonder that he had remembered to take his tie off, although perhaps he had ripped it off at the last minute as he came up the manicured, green embankment to the first tee by the clubhouse where we patiently waited. His was a desperate and flamboyant, ritualistic gesture of reclaiming his freedom from a past he probably feared he would never escape.

It was our first sighting of him. Who invited him, I don't recall, and forever after I could never shake the image of him as taking off preparatory for a crash landing. It made you wonder what his personal flight plan was. It was only gradually, and painfully, that I would learn that he did not have one, had never had one, had spent his lifetime seeking clearance for takeoff from a distant, mysterious tower.

I must confess that, perversely, it never left my mind that if that day was ever to be granted him, I simultaneously hoped and dreaded that I would stand witness to his destined calamity, because he carried with him an aura of doom or deliverance. As if to spite his own deeply conflicted soul or perhaps because of it, I knew that in the end there would be no halfway measures. Strangely enough, I felt both responsible and connected from the beginning, as if in his destiny would be found the secrets of mine.

From the outset, his prodigious tee shots were a sight to behold and, one might have thought, those of a titan. They were high, far, and mighty, as if meant for a distant land far beyond the face of the earth. Unfortunately, the swoosh of his clubhead, the sudden sight of the soaring white sphere, followed frequently by the ball's wild flight for trouble confirmed that very tale. The message seemed to be that if there was going to be anything left to salvage, in his personal life I mean, emergency care would be mandatory, if it were not after the fact, afterlife. What I did not know at the time was that he had crashed many times before, more, that he had spent his lifetime searching for personal debris scattered far and wide from an unending series of catastrophes.

I dubbed him Air Cadet. Believe it or not, his real name, or perhaps I should say his earthly name, was Johnny Knight. He called me Sylvan Straight Arrow, my name, then and now, being Sylvan Woody, both names befitting our games on the links, if not mine off it. But Air Cadet fit his personality as well as his game.

Johnny Knight was homegrown, small-town Hollywood, his greatest desire to be dashing and dramatic, swash-buckling. He yearned to be heroic, an idealist of action. A fearless high school quarterback. A daring second lieutenant. Take no prisoners, storm the barricades, make eagle from the fairway. It broke my heart when I began to divine his deep divots on the golf course as symbolic evidence that life had repeatedly done Johnny foul, that a multitude of catastrophes had conspired to rob him of every pulse of dash and verve in his body. But he remained heroic to a fault, a true descendant of the Knights of the Round Table, still pursuing the Holy Grail in mythical time.

I could not help but feel that the Air Cadet desperately needed a co-pilot or a caddie on course who would try to caution him that full throttle was not always the way to the green, to glory and grace. Unfortunately, he seemed fated to carry on his private battle all the way to the hole, all the way to his inevitable doom. I bled for him.

On those few occasions that he consented or, rather, thought to wear a bona fide golf shirt, Johnny's bared biceps revealed that he was still strong and sinewy, despite his middle years, and that he had probably once been handsome. But the severely retreating hairline, further evidence perhaps of hard play, topped off by a bald spot on the crown of his head, left that to the imagination. As I said, he could still really crack it off the tee and on the fairways, added to the fact that he relentlessly attacked, went for everything, always, no matter whether yawning ravines awaited the slightly errant flight of the ball, that the limbs of mighty, northern pine trees looked to wave aside a misdirected line, or the howling winds of the hollow hills rendered any gamble foolhardy.

As it were, his drives from the tees frequently sailed out of bounds, which, needless to say, made going for it a moot point, going for score anyway. Either that or he would top his tee shot, striking the ball with such ferocious force that the resulting overspin would telegraph a downward destiny, the ball smacking into the ground from where, admittedly, it would yet roll willy-nilly a hundred yards or more.

Even on those holes where he performed magical feats off the tee, his approach shots, elegant though they sometimes were, more often than not sailed and soared high into the sky, easily scaling the green, again good-bye baby out of bounds, or at least into the far rough. His normal ball flight, if normal it was, rose to such a lofty plane, it was a wonder the pull of gravity was not negated.

Nevertheless, whenever he strode to the tee, charged it actually, particularly on par five's where going for it in two was a foregone conclusion, he arrived with only one thought in mind. He was prepared to do damage. Look out far and wide or look out below. That was the only way he was capable of playing it. Air Cadet, indeed, he would rotate his hips and legs, shift his feet and his weight, and wind up his internal propellers for the mighty roar of takeoff, sending a clear message to that distant tower that this time he was looking to break the speed of sound.